I tried one hand power cell phone emergency charger with disappointing results. The device is very small, and it comes with a promizing USB connector. But when trying to charge either a USB power bank or mobile phone, it is on the limit to break into parts. Searching further, it becomes clear that one can generate about tens of mA reasonable easy and it is suitable only for that. So one could ask that how come this is sold as emergency charger?

Note: The only practical way is first to use this weak charger to charge USB power bank with moderate speed (for not to break the charger itself), and then to use the power bank to charge the mobile phone.

The question remained that how one can recharge a mobile phone in case of emergency; and if you don’t have a proper device like K-Tor’s Pocket Socket, or any other similar .

Recently our printer had stopped working, and I had disassemled it into pieces and had found some promising looking DC motors. These motors are much bigger than what is used in that emergency charger. Therefore this blog is about investigating to reuse a DC motor from an printer to create a portable hand-cranked device to charge mobile phones.

Small DC motors, which have permanent magnets inside, can be used as voltage generators. The expected power is typically between 0.1-5W. Dynamos used in the bicycles are good examples of real generators, even though DC motors are often used as generators in hand cranked flashlights and in miniature wind power generators. I have collected some examples in the table below.

This device contains several plastic gears in order to get high enough rpm. The gear setup is very compact, but under high torque it fails to work. The useable range stays in the tens of mA range (or up to 100mA). 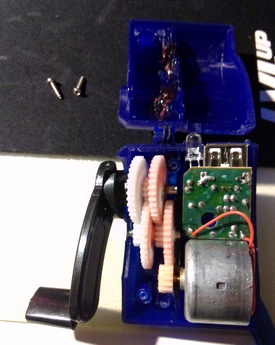 Unfortunately I had saved the motor but not the “transmission belt” from the printer, so there was no good way how to rotate the motor. And therefore as the first attempt, I reused the plastic gears and the box from the emergency charger, and connected the output into a step-up voltage converter. I have removed 2 gears as otherwise it would be too heavy to rotate. It became very clear that the failure here is the weak connection between the motor and gearbox. 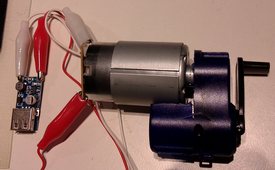 A new plastic support frame was made, and still using pieces from the emergency charger. The motor axis and the bolts used are about 3mm in diameter, and the gears rotates freely on the bolts. It is easy to rotate the motor both at the first and second gear. However, the system start to break down when using 3rd gear under load. This is mainly due to the missing support for the crank. Either one have to build a support for the crank, or make a new setup by using metal gears and frame. The new setup would mean that one would need to buy the gear pieces and that is against to original idea of what to do in case of an emergency. However, if using the metal parts that can be found on RC stores, then one clearly could get into higher rpm. 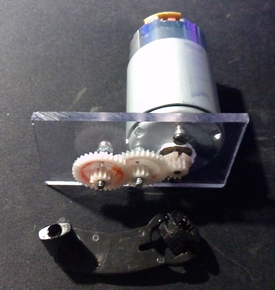 Using crank in the 2nd gear and a step-up voltage converter, it was possible to get about 50mA at 5V. This was promising but still far from the target to charge a mobile phone. Then measuring voltage output when using different gears, it showed that by using the 3rd gear we are getting close to 5V and then set-up converter is not needed any more. Please see table below.

A test was made, with 3rd gear, where motor was directly connected to USB power bank. And it worked! It was possible to charge the power bank with about 140 mA. This setup clearly would be mechanically tolerable if there would be a proper support for the crank. Open question is that how far one can push this gear construction that is made of plastic. It seems that one could rotate a little faster but at the end one might be able to push over 200 mA without breaking some pieces? Please note that this test was done without any proper voltage regulator like L7805.

The figure below shows the pieces used in this test. The emergency charger and it’s small DC motor is shown on the left. The motor from the printer is in the middle. The USB power bank is on the right, just beside the USB charger doctor which displays both the voltage and current. 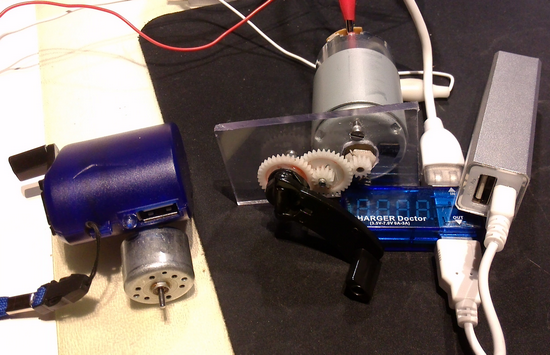 I still intend to build a charger, with following conditions

The current best alternatives are:

I do have one flashlight, for which I intended to connect a step-up converter, but then realizing that there is not enough current. The crank mechanism and the gear box are more solid, and reusing this setup looks promising. Please see figure below.

If I do get an old cordless drill, then that is the 2nd best option. The option 3 is interesting from the learning point of view.

Please note: If one really would need to get a realiable emergency charger, then don’t forget the commercial alternatives (K-Tor and others) mentioned in the beginning.

To see the final setup, please see the 2nd test.

This entry was posted in DIY, For Fun or Interest, Gadgets, Hobbies and Other Interests, Tests, Tips. Bookmark the permalink.