Flowgorithm is one of the visual programming tools available today.

The figure below shows when execution is ongoing in slow speed. One can see where the execution is, both in the big flowchart and in the source code window (in this case Java). In addition, there is variable window (lower left) showing that 2 lotto numbers had been generated so far. The console window on the lower right is used for input and output operations. 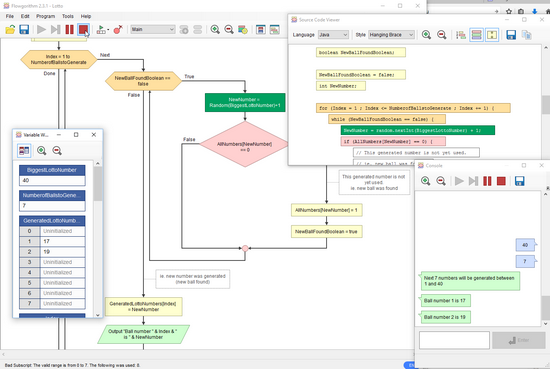 The figure below is the clipboard copy of the flowchart in flowgorithm. The tool can also export in emf and svg formats.

This file is zipped. unzip in order to get the “Lotto.fprg” file.

The generated java code worked well, as can be seen in the figure below. DrJava (portable) was used to compile and run the code. There was only 1 minor tweak needed (ie. one needed to initialize the NewNumber variable, see line “int NewNumber = 0;”) 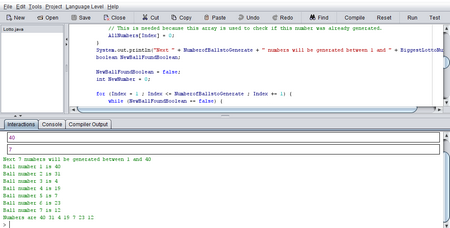 This entry was posted in Basic Tools, For Fun or Interest, Hobbies and Other Interests, Tests, Tools. Bookmark the permalink.