SCENECT with Kinect, Tools for capturing house layouts in 3D

SCENECT is a free tool from FARO to capture 3D point cloud of objects and environments. There are several other tools for the similar 3D capture, and the choice depends on the goals. In this case the main goal is the capture house layout with furniture into a 3D model. 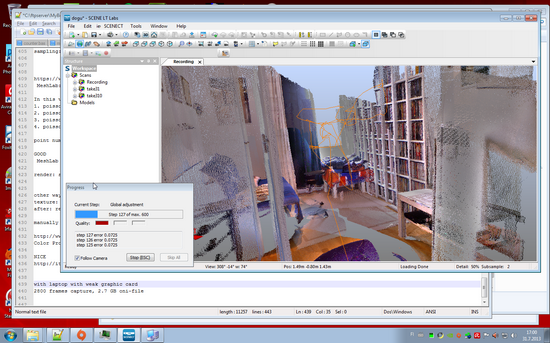 The 28cm high toy dog was captured with SCENCT. The ruler under the dog is 40 cm. At this point in time, the color on the dog face looks good. However, when moving the kinect around the dog, a slight mimatch occured, which caused not good looking color mixing. It is a challenge to try to capture this small objects with kinect, and to keep track on the camera (kinect) position accurately. Any slight mismatch in position causes a color mismatch.

However, for capturing house layouts the slight mismatch is not disturbing. 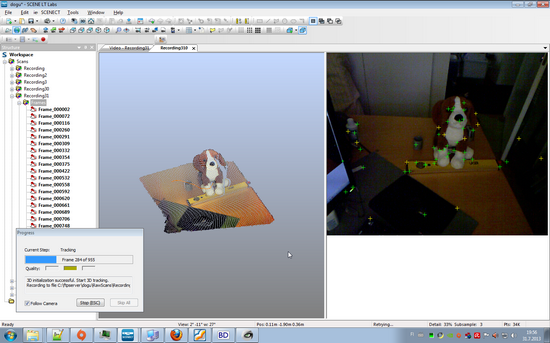 The captured scene was transferred as pointset (pointcould) in wrl format into Meshlab .
The dog object was extracted from the imported pointset.
In meshlab, surface (mesh) was generated from the pointset, extra mesh deleted and exported as obj into a file. 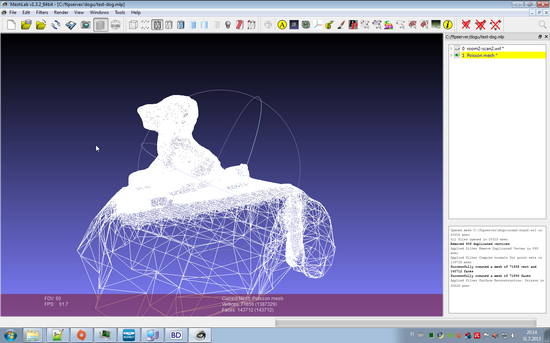 The obj was imported into Art of Illusion 3D program, where golden texture was added into it. (I was not able to create the original texture using Meshlab and SCENECT image captures. To do this in meshlab is not “that ” easy) 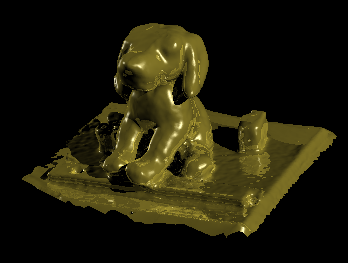 This entry was posted in Anvanced Tools, Audio and Video, For Fun or Interest, Gadgets, Hobbies and Other Interests, Innovation and new tech, Recommended Free Tools, Robotics, Security, Tests. Bookmark the permalink.