I promised to “have a look” on a piano that did not sound “right” any longer; not for some time. A piano tuning professional had said that he does not know any piano with this name.

After opening the piano, it turned out that the manufacturer name is visible only in the inside, and that the outside name is something else. So no wonder the professional did not recognize this piano. I had already received the piano tuning key from a local music store, and as a good surprise one of the 3 key heads fit nicely to this piano, see photo below. In some pianos, there is an agraffe that is used to guide the strings (see the horizontal metal sheet). 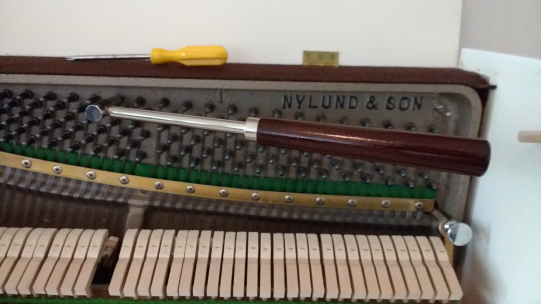 After reading the instructions in the Links chapter, it finally was quite straight forward to tune one key.

In this piano, each key, on the right hand side of the piano, are connected to 3 strings. Before tuning, it is good to check how much the keys are out of tune, for example with and android application like Pano Tuner. Then in the tuning process, you need to damp the other strings of the same key either by finger or by home made tool (like photo below). 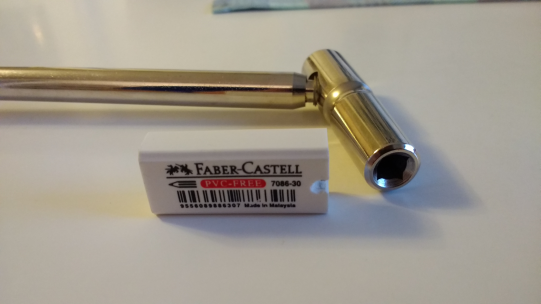 As the first timer, it took considerable amount of time for this one key. Even though I did fine tune some other keys, it would be totally another effort to try to fine tune the whole piano. At the moment, it would be way too much, as that would require a lot of “time and effort”, and coffee breaks…

Posted in Audio and Video, Basic Tools, DIY, For Fun or Interest, Hobbies and Other Interests, Piano, Tests, Tips, Tools | Comments Off on Test, DIY tuning a piano key

This is continuation to DIY CRM: part 1 for a small team, where the MS Access was used as a simple tool to keep track of tasks or cases for a team.

The same tool can be used for a simple personal task management or time management. It is focussing on maintaining the list and priority of the ongoing tasks, and this can be both work and private related. For added security, it is possible to encrypt the file (menu option File->Info). The figure below shows the main concepts. 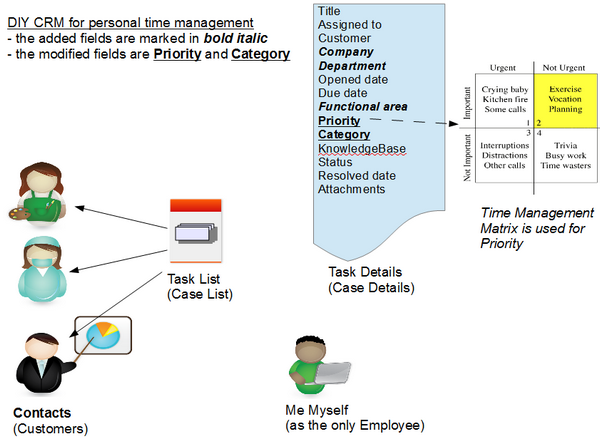 The screenshot below shows how 8 tasks could look like. Task 7 is opened, and in the details form one can select the details like Priority. 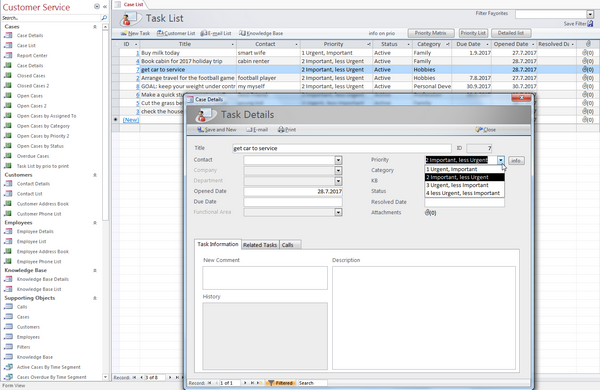 The possible values of Priority are:

If needed then these values can be modified. There are several articles about time management. As a reference, the picture shown in Wikipedia is used. 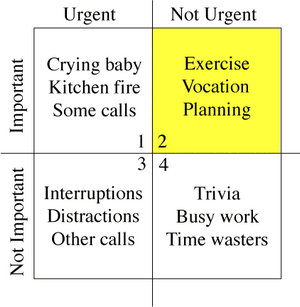 The screenshot below shows the new report called “priority matrix” in the Task list or “Task list by prio to print” if looking the reports listed in the left menu. In addition to tasks, one could also list here the main personal goals so that they are always visible (see task 8 below). 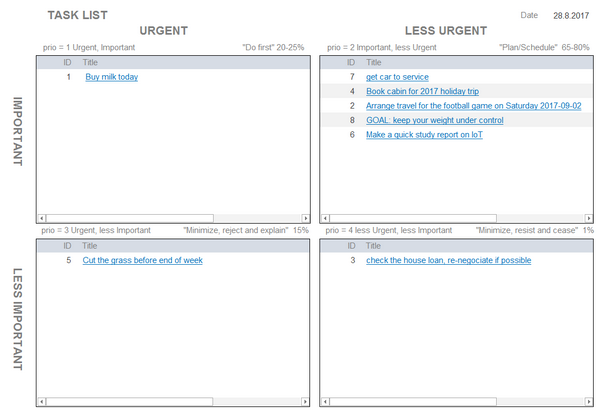 MS Access is included in the MS Office set of tools. I was playing around with it, and discovered that it comes with several build-in templates for different tasks. One of the interesting template is “Customer service” template, that was close to what I have been looking for. The figure below shows how the original template Customer Service looks like. 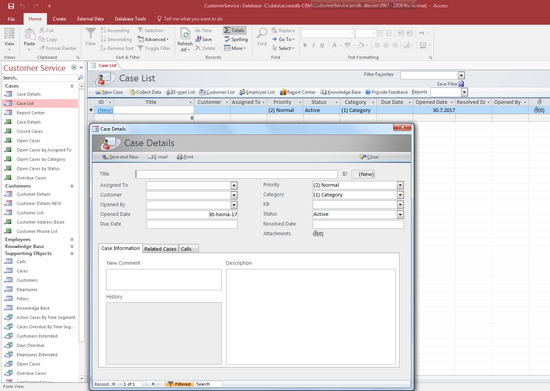 Even though the interface looks very technical, it is straight forward to use and one can stick into the main view “Case List”. Also it is possible to modify the file, and add additional data and reporting capabilities without any programming. The figure below shows the main concepts and what data fields was added in this DIY CRM. 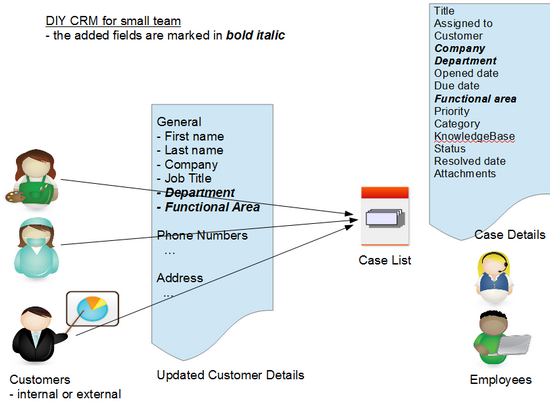 The screenshot below is after the modifications. 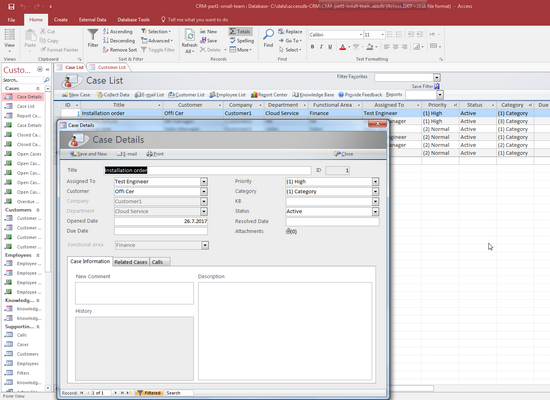 I have created 2 new reports to cover those new data fields: “Open Cases 2” and “Closed Cases 2”. And the 3 data fields “Company”, “Department” and “Functional Area” are included in the “Case Details” report. The list of values for “Priority” and “Category” can be changed. In this case, they are kept as in the original template. (I have also changed all the “dates” into “short form”; personal preference. You can easily modify this in the file.)

In the part 2, the same access DB is further modified so that it could be used as personal task or time management tool.

After few years, even after little use, my Lacie 1000 Gb NAS went broken. When powering it up, the hard disk did not spin, but a smoke started to come up from the back side of the box close to the power cord. The power connector melted, but there were no other visual damage.

The only way to recover files was to take the hard drive out from the box and get it directly connected with a PC. Luckily I had an USB to SATA adapter, so the connection was easy. When connecting it into a windows 10 machine, it showed that the USB drivers were working fine, but there were no new hard drive available. The figure below shows the opened NAS box on the right, and the detached hard drive on the center. (The usb drive on the left is to make the backup into that one.) 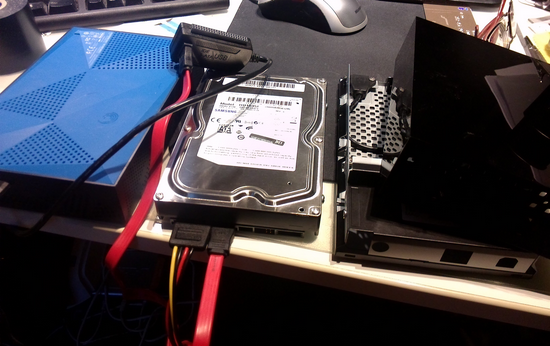 After a little search, the reason became clear: this model has a ARMv5 compatible SoC (System on Chip) which can run linux and that the filesystem in the drive is most propably xfs (ie. not recognized by Windows OS) . In this device, the CPU is 88F6281, which seems suitable for these NAS devices. 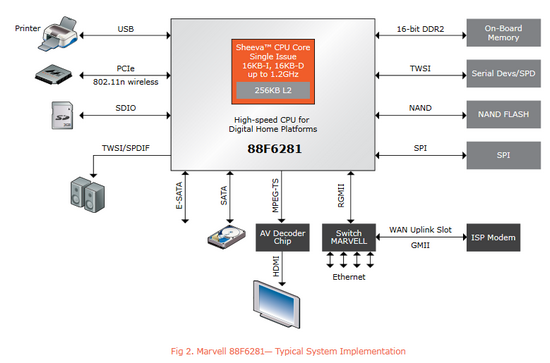 And then after connecting the drive into xubuntu linux in VirtualBox, then files became accessable:-)

The other USB drive was also connected to the same xubuntu, after which it was possible to copy the files. The printout below shows the xfs for sdb2 (NAS disk) and ntfs for sdc1 (USB drive). 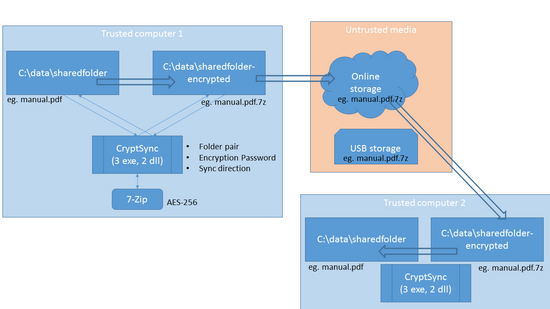 Posted in Anvanced Tools, Recommended Free Tools, Tests, Tips, Tools | Comments Off on CryptSync, a simple alternative to protect your files for sharing

Survey of ISO certifications, results for 2015

ISO is having surveys about number of ISO certifications, it is worth to have a look 🙂

The table below is taken from the executive summary.

There are also excel files available for each ISO standard that shows certifications per country or industry… For example for ISO 27001, the total number over the years is shown below. 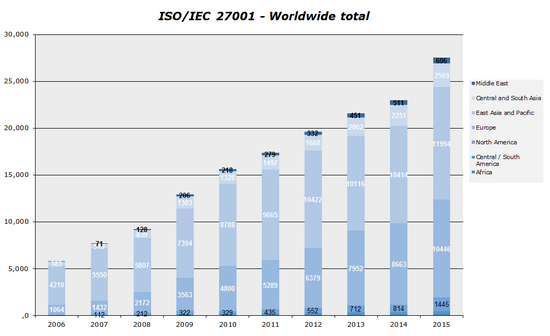 It is worth to have a look at the recent study report called The 2017 Global Information Security Workforce Study: Women in Cybersecurity.

It can be found at the research page od the the Center for Cyber Safety and Education, or directly here. 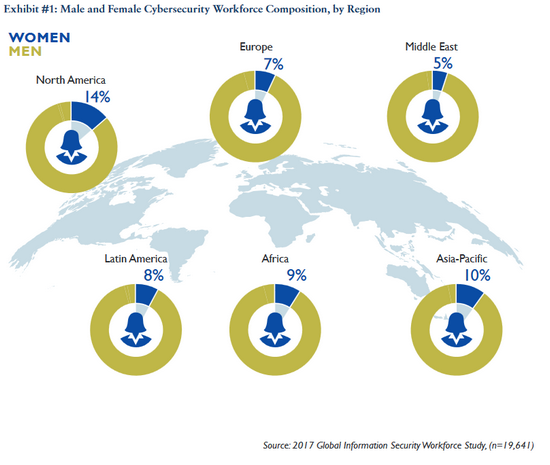